18 November European Day: The Congress involved in the fight against child sexual abuse

The Congress participates in the events organised on the occasion of the European Day on the protection of children against sexual exploitation and sexual abuse that takes place on 18 November with statements from its president, Mrs Gudrun Mosler-Törnström, as well as five members addressing the public in their own language (Dutch, Greek, Russian, Serbian and Turkish).

Launched in 2015 by the Committee of Ministers, the European Day adds on to the work carried out by the Council of Europe and its member states in the framework of the ONE in FIVE Campaign to stop sexual violence against children, which ended in November 2015.

The objectives of the European Day are to:

• raise public awareness of sexual exploitation and sexual abuse of children, and the need to prevent such acts;

• facilitate open discussion on the protection of children against sexual exploitation and sexual abuse and help prevent and eliminate the stigmatisation of victims; 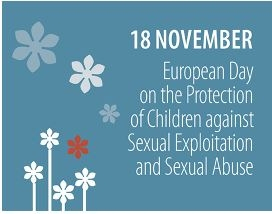