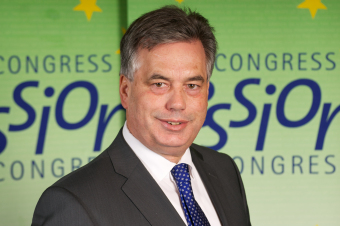 “We have the tools to fight sexual violence and abuse of children at local and regional levels”, declared Clemens Lammerskitten, Vice-President of the Congress of Local and Regional Authorities and member of the regional parliament of Lower Saxony (Germany), during the Parliamentary Conference on the implementation of the ONE in FIVE Campaign held in Baku, Azerbaijan, on 1 June 2013. These tools, consisting of the Lanzarote Convention and the Pact of Towns and Regions to Stop Sexual Violence against Children, aim to prevent abuse, protect victims, and prosecute perpetrators while ensuring the full participation of children. “We are still faced with the major challenge of getting towns and regions to sign up for our Pact. I’m very pleased to announce that Dammarie-lès-Lys – town of Jean-Claude Mignon, President of the Parliamentary Assembly – has signed up. This is an example we should all follow.” Closing his presentation, Mr Lammerskitten expressed his wish that the joint efforts continue in the Council’s member States to raise awareness of the ONE in FIVE Campaign and the Pact so Europe’s children can live free from the horror of sexual violence. On the occasion of the Conference, Mr Lammerskitten presented the Pact to the Mayor of Baku, Hajibala Abulatybov, who expressed his interest in signing the Pact.