Emin Yeritsyan : ''Organising committee meetings in the field enable members to get acquainted with the situation locally and increases Congress visibility'' 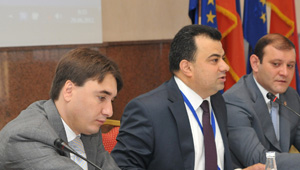 ''Organising committee meetings in the field not only enables our members to get acquainted with the situation locally, it also increases the visibility of the Congress in the member states. It’s a very positive experience all round,'' stated Emin Yeritsyan, Chair of the Current Affairs Committee at the meeting of the Committee in Erevan (Armenia) on 29 June 2011. The participants discussed the priorities for the committee’s work, in particular the Council of Europe’s “ONE in FIVE” Council of Europe Campaign to stop sexual violence against children, the influx of migrants from the southern Mediterranean and the project to promote access to social rights for young people from disadvantaged neighbourhoods. The reports on the situation of Roma in Europe, on energy supply at local and regional levels and on “education for democratic citizenship – tools for cities” was also examined.