Home
The City of Salford commits to stopping...

The City of Salford commits to stopping sexual violence against children 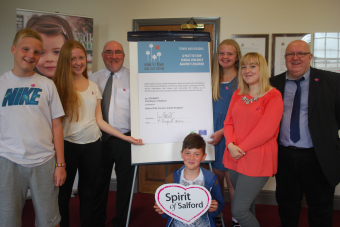 Salford joins Liverpool, Nottingham and Derby to become the fourth UK city to sign the Congress' Pact of towns and regions to stop sexual violence against children.

City Mayor Ian Stewart said “This campaign aims to highlight the problem of child abuse – which is mostly committed by people close to the individual child.  If anyone in Salford has any concerns they should not be afraid to speak up, whether they are a child or an adult concerned about a child. It’s far better to investigate concerns and find nothing untoward than to stay silent and find that a child goes on being abused and suffering."

Councillor John Warmisham, Head of the UK Delegation to the Congress, added: “The Pact is a check list of good practice – covering everything from making children aware of their rights to training people who work with children and setting up care for children who do fall victim to abuse.  Most of these measures are already in place in Salford and the UK but it never hurts to remind people that we will not tolerate abuse and exploitation of children.”

Johan van den Hout, Congress Thematic Spokesperson on Children, welcomed Salford's commitment to the Pact and to combatting sexual violence against children and encouraged all Congress members to follow John Warmisham's example of raising awareness of municipal and regional councils of the Council of Europe ONE in FIVE Campaign and the Congress' Pact.