Home
The City of Nis signs the Pact of Towns... 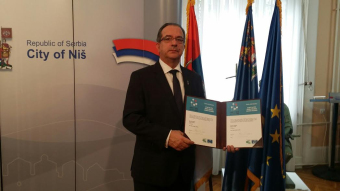 By signing the Pact of Towns and Regions to Stop Sexual Violence against Children, the City of Nis (Serbia) joined the ranks of many other European cities and regions that have committed to protecting and promoting the safety of children and young people living on their territories. The document was signed by Nis City Mayor Zoran Perisic who, on this occasion, said that the City of Nis would join other European cities committed to the ONE in FIVE Campaign which are applying the standards and instruments of the Council of Europe to establish structures and mechanisms to protect children from all kinds of violence.

“Local and regional authorities have a key responsibility together with national governments to promote and protect citizens’ human rights, which includes the s the safety and wellbeing of children and young people ", said Mayor Perisic adding that the Pact provides a list of practical initiatives and measures to be implemented at local and regional levels in order to develop friendly services to children and to protect children and to contribute to the prevention of sexual violence within the community.

“I sincerely hope that by implementing the measures promoted by the Pact we will achieve this important goal to prevent sexual violence against children. We will also raise citizens’ awareness of the importance of cooperation to safeguard the safety and welfare of children and young people living in Nis" concluded Mayor Perisic.

Nis City Assembly adopted the Pact of Towns and Regions to Stop Sexual Violence against Children at its session held on 14 October 2014, the act was published in City of Nis’ Official Gazzette No 451/2014-02.

A working group will be established as a part of the Office of the Mayor to work on the implementation of measures presented in the Pact.