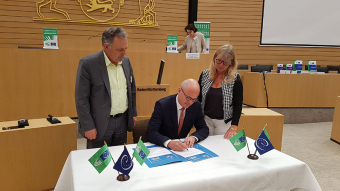 "Cities and regions are at the frontline of the fight against violence against children and we have a key role to play. In Germany, our policies take into account the protection of victims but also and above all prevention, especially among young people," said Dr. Alexis v. Komorowski, Executive Director of the Association, at the signing ceremony. "It is a subject that transcends borders and concerns the whole of Europe. This is what makes the Pact initiated by Congress so crucial," he added.

The "Pact of Cities and Regions against Sexual Violence against Children" proposes various measures and strategies to prevent abuse, protect victims, prosecute perpetrators and ensure the full participation of children in the process as a whole.