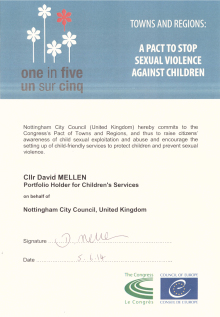 Nottingham City is highly committed to combatting child sexual exploitation and abuse of children and has a well-developed strategy and services.

The Child Sexual Exploitation Action Plan has very similar aims to the ONE in FIVE Campaign: the awareness-raising campaign in schools is well developed at primary level and is being improved at secondary level.  A theatre group has been set up which has designed a hard-hitting play to bring home the message and is doing the rounds of schools and care institutions.  Training in recognising victims has been given to all council staff.  Nottingham has also adopted a multi-agency approach with regular meetings of all stakeholders to identify children at risk.  “Lead practitioners” have been designated whose contact details are widely distributed and who can provide early expert help to children needing it.

Nottingham is cooperating with the NSPCC on working with adults who have escaped prosecution but are considered to be a danger to children.