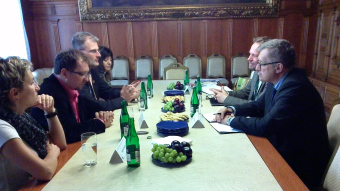 From 8 to 10 September 2014, Johan van den Hout, Congress Thematic Spokesperson on Children, travelled to several Czech cities to talk to political leaders about the Council of Europe's ONE in FIVE Campaign and the Congress's Pact of towns and regions to stop sexual violence against children.

During his meetings with the Deputy Mayors of the cities of Brno, Ceske Budejovice, Hradec Kralove, Jihlava, Liberec, Olomouc and Plsen (meeting with the Muncipal Council Member in the latter), Johan van den Hout learned that, although the Czech Republic only signed the Lanzarote Convention in July of this year, Czech towns and cities have delegated powers to tackle sexual violence and abuse of children according to Act 359 of 1999 on the social and legal protection of children.

"I am very impressed with the way the authorities in these cities are implementing Act 359 and the additional policies and strategies they have devised under their own powers at the local level." said Johan van den Hout.  "I welcome their commitment to combatting sexual violence against children and to the Pact of towns and regions.  The methods and tools they have devised are good examples to be followed by other towns and regions."

All seven cities were hopeful their city councils would vote to sign the Congress' Pact in the near future.