Karl Wilfing, Member of the Government of Lower Austria commits to protecting children 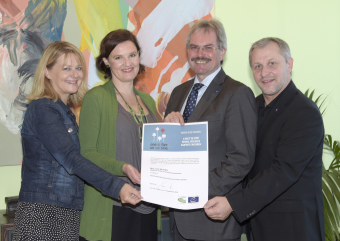 Karl Wilfing, Member of the Government of Lower Austria has signed the Congress' Pact thus committing to the fight to stop sexual violence against children and to the Council of Europe ONE in FIVE Campaign.

During his awareness-raising visit to Austria last April, Johan van den Hout met Henriette Hoefner from the Lower Austria Department of Prevention of Violence and representatives of the Youth Department to discuss the Council of Europe ONE in FIVE Campaign and the Pact.  Lower Austria has a comprehensive policy to combat sexual abuse of children and works closely with a number of institutions, including NGOs, hospitals, women's groups, the police, etc.

Lower Austria is the second Austrian Region to sign, the other being Tirol.