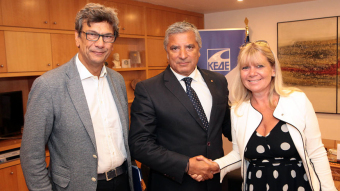 In the wake of her visit in Athens and the exchange of views with members of the Special Permanent Committee of the Regions of the Hellenic Parliament on 31 August, the Chair of the Congress Current Affairs Committee, Gabriele NEFF, held talks, on Friday, 1 September, with the President of the Central Union of Municipalities of Greece (KEDE), George PATOULILS, and with Congress’ Vice-President and Head of the Greek Delegation to the Congress Michalis ANGELOPOULOS. The meeting was dedicated to cooperation between the two bodies, in particular to further promote the '1 in 5 Pact' to stop sexual violence against children. It was agreed that KEDE will sign the Pact at its annual assembly in autumn, in order to ensure that also more Greek municipalities join this initiative.

In addition, the Congress has been invited to make a more detailed presentation of the aim and content of the campaign. During a meeting at the headquarters of the Attica Region earlier on Friday, Gabriele NEFF and Attica Governor Irena DOUROU exchanged views on possibilities to further promote the Pact at the regional level and to strengthen continued cooperation. On the occasion of her trip to Athens, Gabriele NEFF was also able to visit the Schisto refugee camp close to the city, where currently some 700 asylum seekers from Afghanistan and Iran are hosted, as well as 320 children and 30 unaccompanied minors under special protection.