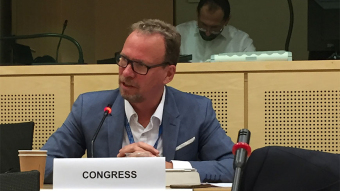 « Local and regional governments are on the frontline of migrants’ reception, in particular unaccompanied refugee children,” stated Johan van den HOUT (Netherlands, SOC), Congress Spokesperson on Children, addressing the Lanzarote Committee on 21 June 2018, in Strasbourg. “With their families or alone, children are arriving in Europe seeking refugee from war, conflict and poverty. On their way to find a better life they are risking hardship, violence and abuse” he underlined.

Congress Spokesperson presented the report on “Unaccompanied Refugee Children – the role and responsibilities of local and regional authorities”, adopted by the Congress in March 2018. The report encourages member States to adopt a child-rights-based approach to maximise the respect of children’s best interests. It also underlines the special responsibility of local and regional authorities in giving unaccompanied refugee minors access to services, and in developing child-friendly procedures, for example in age-assessment.

M. van den HOUT also presented the positive results of the Pact of Towns and Regions to Stop Sexual Violence against Children. The Pact is a tool initiated by the Congress which provides a list of practical actions and policies to be implemented in order to set up child-friendly services, protect them and prevent them from any sexual violence they could be exposed to. The signatory cities undertake to develop initiatives in this direction. “All in all, 47 cities and provinces, 4 regions and 24 Non-Governmental Organisations and associations belonging to 21 different countries have already signed the PACT,” he noted.